After one week with Wiko Robby, it’s time for an updated report. Yes, living with 1 GB of RAM is perfectly acceptable once you’re not a gamer. Yet, there are a few caveats.

First of all, there is–after all–a certain delay when returning from some apps to the home screen. This is even more noticeable when I’m using Nova Launcher instead of My Launcher. As a matter of fact, there is a rather strange thing happening when using a different launcher than the default one.

Sometimes, upon exiting an app, instead of being shown Nova Launcher, the user sees My Launcher. As the defaults are correctly set, hitting Home launches Nova Launcher, but why isn’t Nova shown upfront? I don’t want to force Nova’s persistence (it has such a setting), because I want the system to be able to unload the launcher if more RAM is needed–but then I also expect it to reload it instead of loading My Launcher first. Maybe the real issue is that the included My Launcher is still in the RAM even when Nova is the default home launcher and in use. Having two launchers in the RAM is not Zen…

But there’s more. Sometimes, Nova shows up in the Recent App List (the 3rd button, which used to be Menu even on my Huawei, but now it’s called either Recents or Overview), which means it’s killable just like any other app, which shouldn’t have been the case. When this happens, you can be sure that when you’ll exit from certain apps, My Launcher will pop up first. 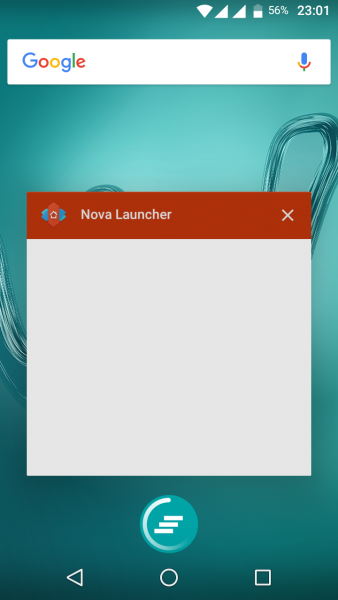 I guess I’ll go back to the default launcher. What bothers me the most with these EmotionUI/MIUI-launcher is the 4-row layout, not the “all apps are on the screens.” I normally group apps thematically in folders on several screens and only occasionally use the AppDrawer; and Wiko adds a nice My Apps list that scrolls vertically and is grouped by letters–à la Windows Phone.

The second problem is that, as previously mentioned, TeslaUnread is unable to show the unread count in Nova Launcher, no matter what permissions I granted and how much I whitelisted both apps. Not on this device (because it seems to work on other Marshmallow devices.) One more reason to drop Nova.

The third problem is a more severe one: many weather widgets simply don’t update. I always set the update interval as low as possible, preferably to 15 minutes, but for many weather widgets (not the included one, which uses AccuWeather), the update only happens irregularly, despite having the Wi-Fi always on and the apps whitelisted to run in the background.

The only way to make sure a widget is updated is to set it to update on screen unlock, but from what I’ve tried, only Weather Underground offers this option: 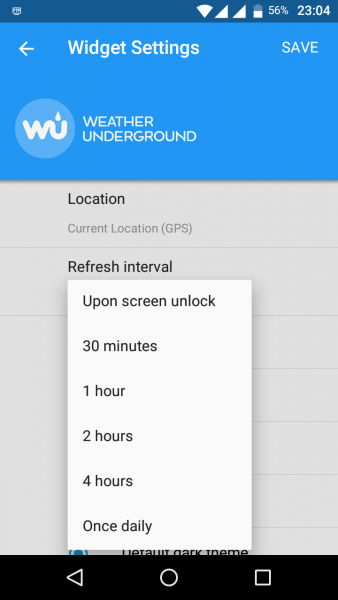 The behavior of various weather widgets is not the same for all. Some widgets that include the time keep the time correctly updated, but the weather icons and values are outdated–this is the case for WetterOnline (in English “Weather & Radar”) and WetterOnline Pro (“Weather & Radar Pro”). The widgets for wetter.com simply don’t work under Nova Launcher (left), and they work but never update under My Launcher, not even with regards to the hour (right): 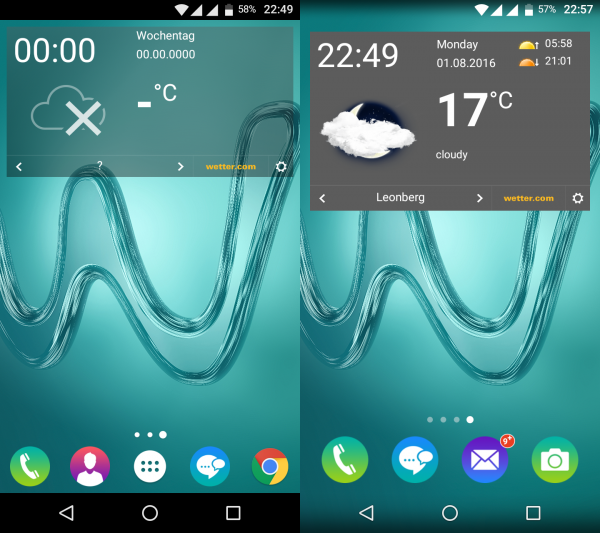 I’m not the only one to complain: 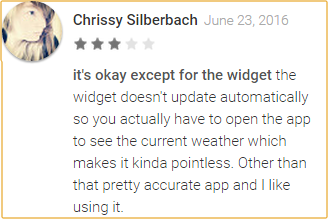 It worked well under Android 4.2.1 though, and the app is updated regularly by its developers. I don’t get it.

MeteoGroup’s WeatherPro (currently at 0.10 €, but Premium features are IAP) and probably WeatherPro Free (much more limited in widgets) work fine most of the time, which means they still fail to automatically update every now and then, but I remember I sometimes had this issue even under 4.2.1.

There’s one small issue with fonts I’d like to speak of. So far, I’ve seen fonts that are too large in two apps: in WeatherPro, where the precipitation is cropped in the long-term forecast, and in the 4×2 widget of WetterOnline (aka “Weather & Radar”) Pro, where the current temperature is cropped in both launchers (the 4×1 widget is fine): 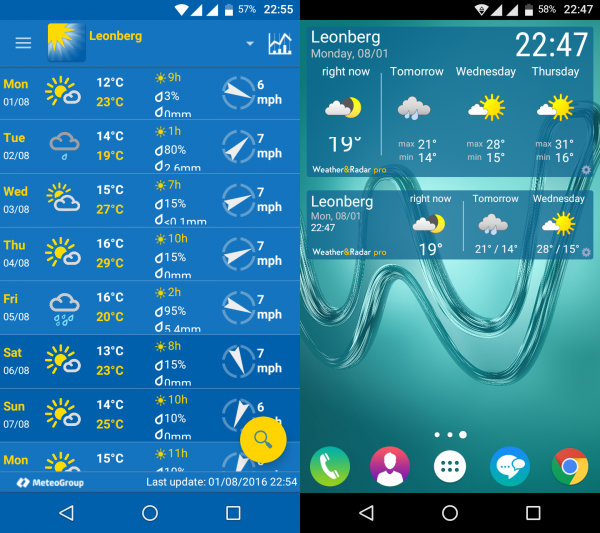 720p in a 5.5″ give a 267 dpi physical density, and Android reports 240 dpi in this device (typical logical values are 240 and 320, not 300 dpi). A competent software developer should’t have issues with that, as any text should fit the area it’s supposed to fit, and there are only two choices: either that area and the font size are defined in pixels, because they must match some background bitmaps and icons (poor design), or they’re defined in dp or sp, and in this case “dp” should scale the text as well as the layout (hence no cropping problems), whereas “sp” should adapt if the user has the option of changing the text size. The user can’t change the font size in this app, so the developer shouldn’t have used “sp”–but an “inexact” dpi might be interpreted as a user-defined size, and this is when the difference between 267 dpi (actual) and 240 dpi (logical) might affect the displayed fonts. Poor design and poor testing, as there are so many 720p 5.5″ devices…

Other weather widgets seem to work rather fine most of the time with regards to self-updating–here, Weather 14 days (“Wetter 14 Tage”–but actually “El Tiempo 14 días”) and Sam Ruston’s Weather Timeline – Forecast: 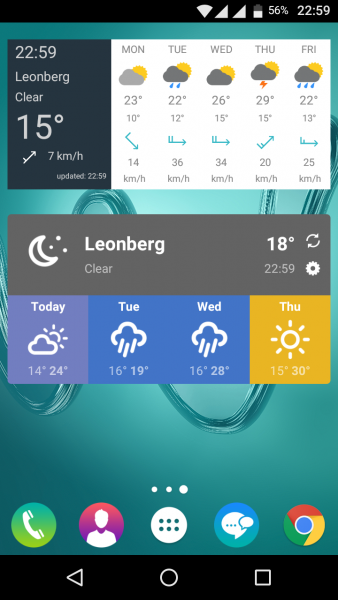 What are the factors that could affect such widgets? I’d list here the multitude of settings related to both power saving and permissions–and Wiko adds to Marshmallow’s own settings!

Here’s what I have under Marshmallow’s own Settings:
► Wi-Fi, Advanced: Keep Wi-Fi on during sleep (ON)
► Battery: Standby intelligent power saving (ON)

Nobody explains what’s this bloody “intelligent power saving” doing–because it’s distinct from the famous Doze (which has its own settings under the 3-dot menu): 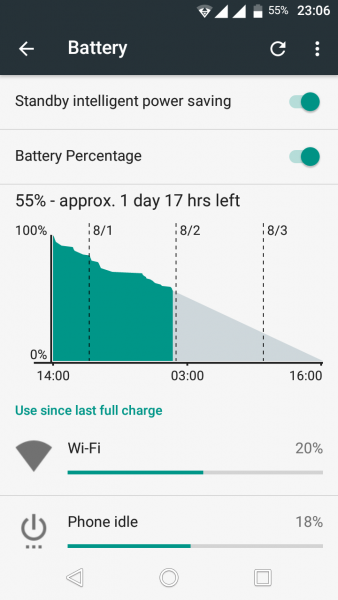 Wiko’s Phone Assist has many sections… 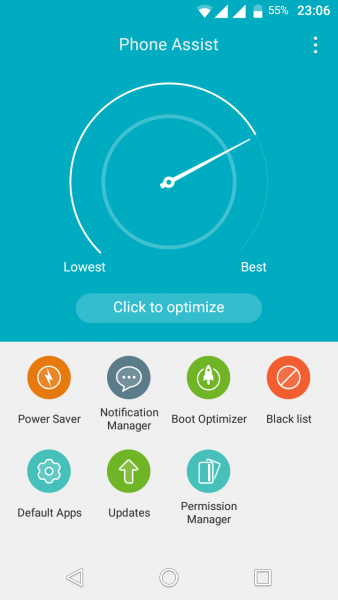 …of which I’ve found of relevance for the widgets:

► Optimized mode: either OFF, or ON, but with selected “apps that won’t be freezed (sic!) when the screen is off” (the enabled apps are the same as above)
► Eco. Mode (ON), but it only counts when the battery is low, or during the “Saving time period”

The weather apps are whitelisted, so their widgets should update themselves in the BG: 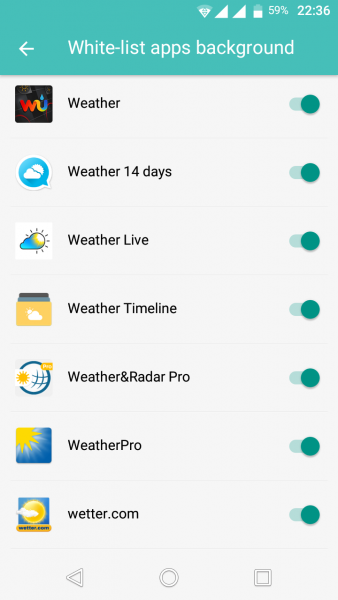 I only tried Apalon’s Weather Live (or its free edition) with the penultimate widget (4×2) that doesn’t show the hour, so I’m not sure with regards to the way it updated itself; but it showed for Leonberg the same data as for Stuttgart Airport, so…

As for the Nova’s TeslaUnread malfunction, other possibly relevant settings under Wiko’s Phone Assist:
► Notification Manager (enabled), with the list of apps that are allowed to issue notifications
► Boot Optimizer: the apps that are allowed to auto-start (I enabled Nova Launcher, Nova Launcher Prime, TeslaUnread, to no avail)
► Permission Manager (probably hijacking the one offered by Marshmallow), just make sure that the above apps are granted all the rights they ask for

I’m a bit puzzled right now. I’ll have to get rid of Nova Launcher, and I’ll also need to choose 2-3 weather apps (out of a dozen!) for which at least one widget I like works well–but more on weather apps, in the next blog post, dedicated to their (lack of) accuracy.

LATE EDIT: The weather widgets that don’t automatically update is an extremely annoying issue, and it must have something in common with the way this specific build of Android tries to maximize the battery lifetime, regardless of the exceptions I set–which only seem to whitelist the apps, but not their widgets!

While noticing that Bright Weather also fails to update, I also noticed that someone complains that the widget stopped updating in Android 5.1: 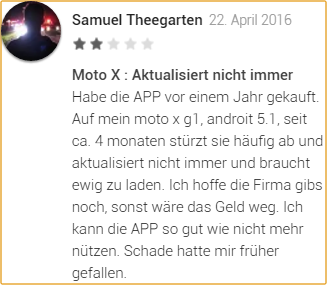 …and some other guy that says the widget displays old data only “sometimes”: 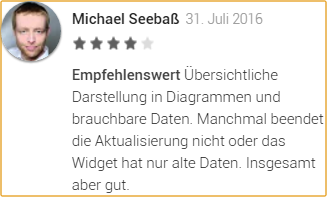 Is there a more widespread issue with widgets failing to update in some builds of Android 5.1 or 6? What is this, Windows Phone gone mad?

IMPORTANT! Update V.37 (received by me on Jan. 18, 2017), which is not a security update, fixed the widgets on Wiko ROBBY with regards to the general functionality: in previous versions (including V.32), most non-system widgets were simply not working at all (e.g. widgets for Twitter or for various news sources wouldn’t display anything), but now they work!

Still, a few widgets wouldn’t update at all, but it might be their fault. The general rule is that if a widget has a “button” or otherwise a way to update itself on touch, then it can be updated manually.

Also, background apps can still be terminated after some time for no obvious reason (at least on the “normal” ROBBY with 1GB of RAM, not on the Thai edition), despite having them whitelisted and not “optimized” in terms of battery, even those apps who add ongoing notifications supposed to keep them alive.

Nonetheless, since update V.37, ROBBY is at least almost fully usable in terms of widgets. I expect to find a similar progress with V.50 (to replace V.45) in LENNY3.

« Marshmallow with 1 GB of RAM—Yes, You Can!
The Hyperloop is snake oil »