Years ago, the problem when using some cheap Chinese phones in Europe was that they didn’t support the 900 MHz WCDMA/UMTS-FDD (UMTS900) 3G band, but only UMTS2100 and either of UMTS850 or UMTS1900, and possibly the Chinese TD-SCDMA in addition. Some European mobile phone operators only use UMTS2100 for 3G/3G+/HSDPA/HSPA+/DC-HSDPA (I know you love acronyms), but many also use UMTS900, and a few ones use UMTS900 exclusively. When a carrier started with UMTS2100 (which was the “normal” way), UMTS900 cell towers were added to improve the coverage in rural areas (generally, in open space), but in some cases carriers skipped this development stage and decided to only invest in LTE (apparently, UMTS900 is not used in Germany). To force users into it, they throttled the 3G speeds way below 21.1 Mbps, so that users who wanted a decent speed would finally purchase a 4G-capable device. Either way, 4G (LTE) is nowadays the norm, and the issues are bigger than most people expect.

Initially, some Chinaware didn’t support the 800 MHz FDD-LTE band (Band 8), which meant for instance that German users should only purchase such a phone if they use Telekom–here’s a table found in a CHIP magazine:

Not quite so. As I wasn’t interested in LTE, and as I’ve been quite happy with 3G speeds offered by both Orange.ro and Telekom.de (see below), I simply decided to ignore the fuss about LTE. And I was shocked to discover how ignorant I was!

From a German article, the harsh truth stroke me: there are more than 40 LTE bands worldwide! (The article is a bit outdated: while it says “almost 40 frequencies,” there are actually 44 such bands!)

And, unexplainable to me, it looks like the German carriers have purchased the right to use other bands too: 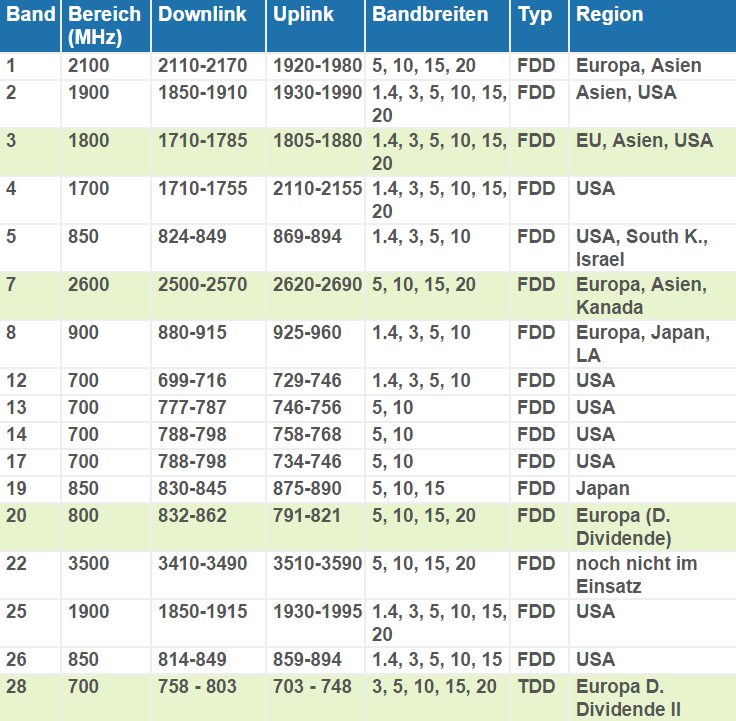 A newer table used by various Chinese shops seems up-to-date (compare it to this page), but it’s difficult to determine the “generic frequency name” for a band, given the peculiar exact frequencies used: 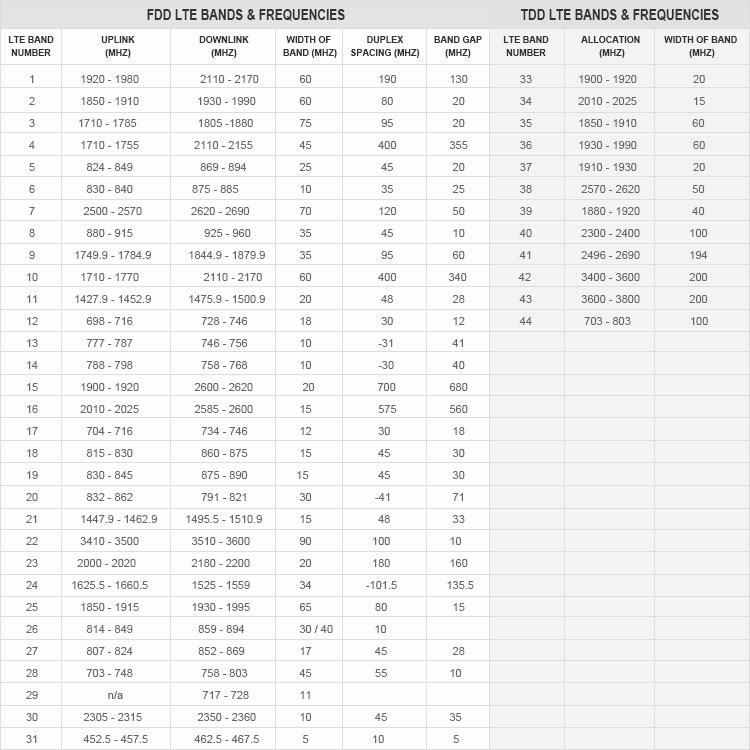 I can only guess 1500 MHz is band 21 (a Japanese band!), which is at least still an FDD-LTE band, not a TDD-LTE one. But what’s the deal with TDD-LTE, currently used in Europe as band 38? (I believe there is an error two tables above: band 28 is a FDD one, not a TDD one; someone must have mistaken it for band 38.)

The comparative advantages and disadvantages of Frequency Division Duplexing (FDD) and Time Division Duplexing (TDD) are not my concern. Let’s just say that one is is symmetric and it uses two “paired” frequencies, one for U/L and one for D/L, whereas the other one is using a time division algorithm in which it switches between U/L and D/L as needed and asynchronously, which is an advantage most of the time, but sometimes it can insert delays. On the other hand, FDD is has a better spectral efficiency for a 50:50 ratio between upload and download, whereas TDD is the least efficient in a 50:50 case, because of the switching time. To me, they’re totally incompatible, it’s as requiring to a TV set to be compatible with both PAL and SECAM–something that actually happened, but why should we always use double standards and a doubled complexity? Why make things complex instead of keeping them simple?

For the next couple of years, I guess we can safely assume that phone that supports the LTE bands 3, 7, and 20 would suffice in most cases in Europe, but the way current LTE phones are supporting various bands is pure madness:

There is a reason that made me stress on band 38. The Romanian DIGI Mobil carrier has a number of peculiarities since its inception. First, it never supported GSM (except for when it used Vodafone’s network in roaming), so even for voice calls you need a 3G-capable phone; most dumbphones don’t support 3G. Then, its LTE network uses the TDD-LTE band 38 exclusively!

That had some implications. For one, the “Romanian” brand Allview–in fact, rebranded Gionee devices!–had a tremendous success by offering 4G phones that support band 38 (it was simple for them, knowing that Gionee targets China and India). Then, the (now obscure for smartphones) brand Philips–used with permission by Shenzhen Sang Fei Consumer Communications, a division of China Electronics Corporation (CEC)–that currently targets Asia, Russia and Ukraine, sold a good deal of LTE devices in Romania, some of them through DIGI Mobil, especially as they support both TD-LTE in the bands 38, 39, 40, 41 and FDD-LTE in the bands 1, 3, 7, 20; e.g. for Philips S396, the bands are listed in an official PDF in English, an official PDF in Romanian, and in also in HTML–Romanian. (The better Philips S616, also supporting LTE bands 1, 3, 7, 8, 20, 38, 39, 40, 41, is not available in Romania as of yet.) Romanians were also able to buy a Lumia 640 LTE Dual-SIM edition that wasn’t available to Western Europe, where only LTE Single-SIM and 3G Dual-SIM were sold; you guessed it, this (Asian?) edition supported the band 38!

The problem I see with such developments is twofold. For now, the issue is that most LTE phones available in Europe only support the bands 1, 3, 7, 8, 20. I don’t care that they don’t support DIGI Mobile in Romania, but I do care that they don’t support the upcoming bands 28 (700 MHz) and 21 (1500 MHz) when they’ll be in effective use in Germany! And who knows what new LTE bands are under implementation in other European countries? Each of Sweden, Poland and Romania already have a carrier that requires a phone to support band 38!

People will thus be forced to purchase new phones, no matter the old ones were otherwise perfectly fine. More expensive phones, usually. Or carrier-“sponsored” devices, something you shouldn’t buy.

My second worry is that I see a trend in this. Today they are forcing people to switch from 3G to 4G if they want reliable data, tomorrow they will force you to use a 4G phone even for voice calls, the way DIGI Mobil forced people to use a 3G phone for voice calls! What do you think VoLTE was invented for? To quote from Wikipedia: “Reliance Jio announced commercial launch of 100% VoLTE service without 2G/3G based services in India on 5th Sep 2016.”

Even if we’re not there yet, the first thing that’s going to happen once you’ll have not three (LTE800, LTE1800, LTE2600), but five or six LTE bands in a country and in use by a carrier is this: anyone not using a phone that supports all such bands will have a pathetic data coverage! Because the five bands supported by most devices (1, 3, 7, 8, 20) are “not enough” for a country, they’re adding new ones, thus instantly making 80-90% of the existing user base unhappy! Brilliant.

The cherry on the cake now. Vodafone Romania announced Vodafone Supernet 4G+, a technology able to offer 1.35 Gbps! The carrier admits that this is a speed that is not supported by the current devices, that the only 4G+ phones that support simultaneous traffic on 3 frequencies are HTC 10 and Samsung Galaxy S7, and that in order to get more than 1 Gbps you would need a device able to work on 4 or 5 frequencies… something that isn’t on the market yet! “We might need to wait for a couple of months until such devices start to become available,” said the Consumer Business Unit Director of Vodafone Romania.

Let’s make a simple calculus. Most people have a monthly data plan of 1 GB. Let’s say some might have 3-5 GB on LTE. With 1 Gbps, the first category of people would consume their monthly allowance in roughly… 8 seconds! The latter would have a half or a full minute of full-speed traffic before consuming their monthly traffic! Who the fuck needs such a thing?

I’ll get back to why I considered I don’t need 4G in the first place. In both Germany and Romania I can get 13-14 Mbps as a sustainable speed in 3G networks that technically support 21.1 Mps or even 42.2 Mps in dual-channel mode. Why would anyone need more on a mobile device? Who is downloading lots of torrents on a smartphone or on a tablet while watching a movie on NETFLIX? This is ridiculous. (By the way, most torrents are illegal.) Also, consider that so many people in Western Europe don’t get such speeds in practice unless they have fiber-glass Internet! Having a faster mobile Internet than the landline or cable Internet is even more ridiculous.

But hey, 5G is around the corner, and it might add to the already existing 44 LTE bands, and it will certainly add to FDD and TDD some other technologies I don’t even want to know about!

Why should we have simpler technologies that work, when we can have tremendously complex technologies that offer solutions to non-existent problems?
___
UPDATE: Die Bundesnetzagentur lists the new LTE frequencies in the page Mobiles Breitband – Projekt 2016.
___
OFF-TOPIC NOTE: I mentioned the better-specced Philips S616 (as opposed to Philips S396), stating that it’s not available in Romania as of yet. Well, it should never be, as it lacks UMTS900 in all its four variants!

There are 4 versions of this smartphone, and none has all the frequencies: