The shoemaker’s children go barefoot, they say. As I don’t have children, in my case this paradox applies to myself. I always had the cheapest computer and the cheapest smartphone that are powerful enough for what I need. I never owned a premium technology product, except maybe for an Amstrad PC in 1993: premium build quality, but still modest in specs, it was a 386SX16 with 1 MB RAM and 40 GB HDD–largely enough for Windows 3.1, but the CRT had a 0.39 mm dot pitch instead of the better 0.28 mm that was “premium” at the time. The problem with modest hardware is that it becomes quickly inadequate as the software… um… can I say “evolves” when it actually requires more and more power to do the same thing?

Long story short, I’m now using a more adequate laptop that doesn’t struggle with Windows 10. And the choice wasn’t easy, knowing that usually everything under 2,000 € (VAT-included) is mostly crap. It’s terribly difficult to find a system cheap enough that has a decent CPU, a very good matte screen, a minimum of 256 GB SSD and a HDD, not less than 8 GB RAM, a keyboard that doesn’t suck big time, and a more than marginally usable trackpad (hopefully Synaptics, not ELAN). Lenovo is a no-go: no more shit made by this horrendous company whose cheap line is atrociously cheapo plastico that struggles not to fall apart! Supplementary, I had to dismiss brands such as HP and Fujitsu-Siemens, for they only offer 1 year of commercial warranty.

Eventually, I opted for an Acer, but not from the common Aspire line (whose premium models are in the V Nitro series, and the ones to avoid are in the E series); it’s from the TravelMate series, once their only line of laptops, now more oriented to business users, especially the P6 series. 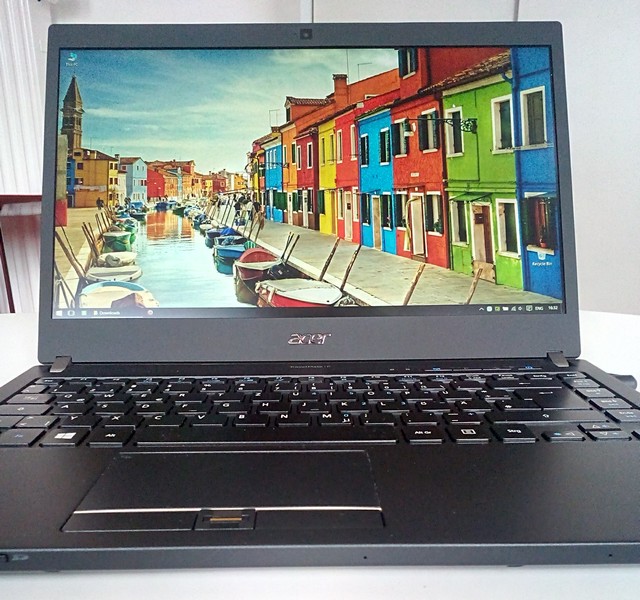 To me, this feels premium. Finally, a good screen! And Windows 10 simply asks for a SSD. The keyboard has a German layout, but at least I’m used to the German ENTER key–it’s the same as the UK ENTER key. As a nice touch, TravelMate P6 has an extra-wide ENTER key, something not available on Aspire V3, V5, or VN.

As it happens, I had a previous positive experience with Acer: my TravelMate 5310 from 2007 still works impeccably (except for the battery, which can only last 2-3 minutes), but it’s slow even with Windows 7. The Lenovo G570 that followed is a piece of crap with a fabulous keyboard and an abysmal display… 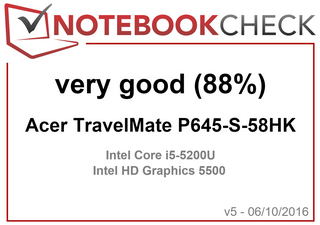 Here’s a detailed review on NotebookCheck.net of an almost identical configuration, except for the different storage: the reviewed system only comes with a SSD, without the added HDD: Acer TravelMate P645 Notebook Review.

What were my first experiences with this laptop and its preinstalled copy of Windows 10 Home Deutsch? (Of course, I added English for the UI, I customized it a bit, I installed everything I needed, but before that?)

The installed crapware was easy to remove–the first thing to go was McAfee. Some of the included Acer utilities are actually useful, and I’ve grouped everything that I didn’t uninstall under the same start folder: 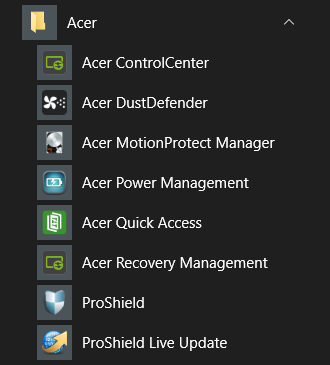 ProShield is the fingerprint app, quite stupid as all fingerprint reading systems used on laptops. Why don’t they use sensors that would read the finger just by touch, like in smartphones or door access systems? The need to swipe your finger on a dash-like sensor makes it totally unreliable and very annoying, not to mention that there are no instructions as to how to setup the fingerprint systems (why the heck is it requiring more than one password?). Well, the fingerprint reader came with the system, I didn’t ask for it.

Acer Recovery Management is part of Acer Control Center and it should be used as soon as possible to create a Factory Default Backup on a 16 GB USB stick. As the system, despite being installed on January 16, didn’t include the 1511 update, I had to make a second recovery image with Windows 10 Update 1511 after I updated it.

Acer MotionProtect Manager, which can be disabled, is supposed to park the HDD’s heads when it senses that the notebook is dropped. I can only hope the accelerometer really works…

Acer DustDefender is a nice idea, but most likely overrated.

Acer Quick Access is the only way to access (among others) the Bluelight Shield thing: when enabled, the color temperature is made “less blue” (actually a bit greenish), to reduce the eye strain. The effect does not appear in screenshots, as it works at the physical level of the blue LEDs of the display, not at the logical level. It has 4 levels, the default one being the low reduction by 18%, followed by medium (36%), high (54%) and Long Hour Mode. 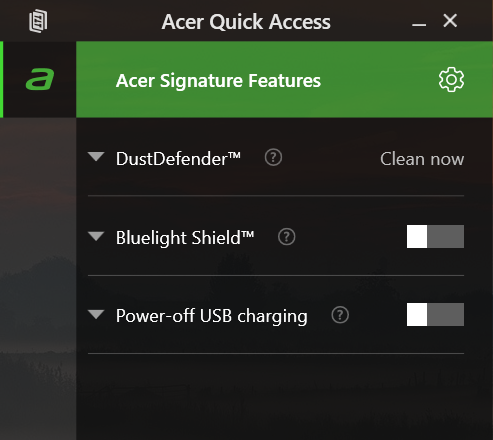 Some screenshots with Acer Control Center: 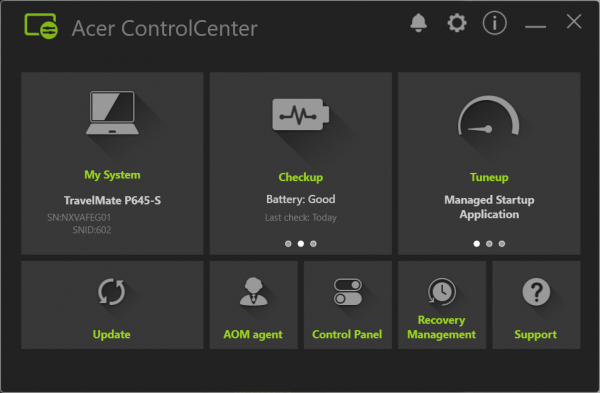 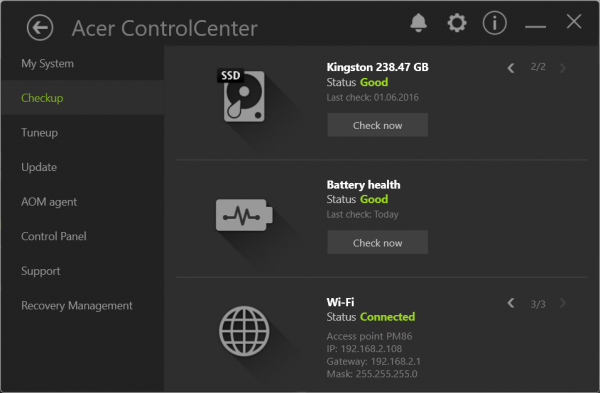 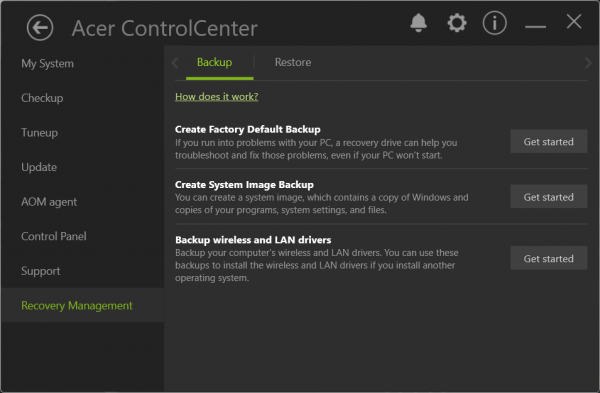 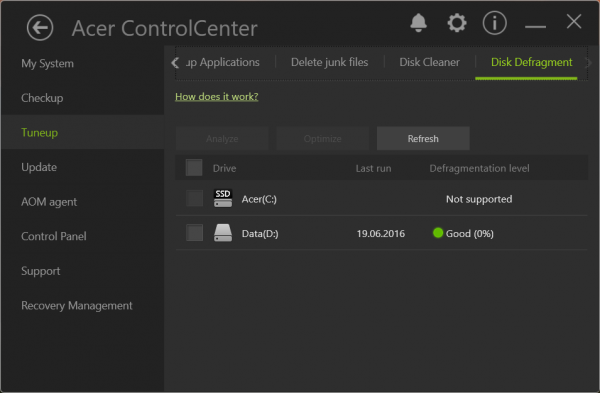 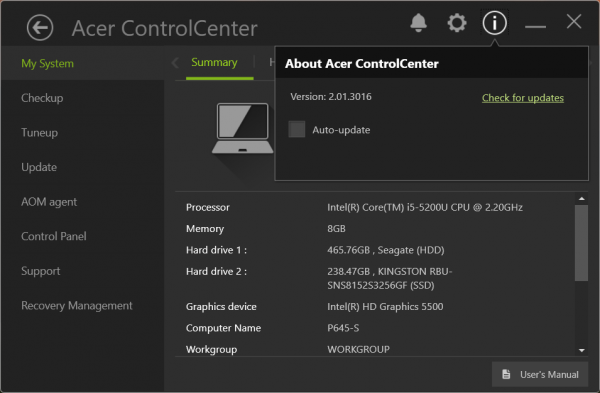 The last one is so I can tell people to uncheck the Auto-update box. For some reason, the update check fails and pollutes with log files C:\OEM\CareCenter\DebugLog. You should also delete a scheduled task, e.g. using CCleaner: C:\Program Files (x86)\Acer\ControlCenter\LiveUpdateAgent.exe (the aforementioned checkbox only affects C:\Program Files (x86)\Acer\ControlCenter\LiveUpdateChecker.exe -auto). And an updated Control Center might not exist anyway: while the entire set of drivers is available for download, there is no page dedicated to Acer ControlCenter, but only one for Acer Care Center, which should be the same app judging by the screenshots (save for the colors), yet the compatibility check tool says “Sorry! This computer is not supported.”**

Oh, and I’ve also installed Kingston SSD Manager, although there are several ways to check SMART data on the SSD.

One quick note on the idiocy of Windows 10 and scaling. With high-definition medium-sized screens, screen scaling is necessary to make small text from menus and dialog boxes readable. For a FullHD 14″, the default is 150%, but I prefer 125%, leaving 150% for 12″-13.3″ screens. The problem is that for programs that don’t read the modified DPI and assume a fixed 96 dpi value, Windows 10 forces a scaling in the worst possible way: it upscales the bitmap of the screen painted by the respective app! Ridiculously enough, this even applies to Microsoft’s own system apps, which get the screen contents blurred, while the titlebar preserves its sharpness!

There is a way to change this a bit, but it won’t help a lot: you can use “the old way” of changing the DPI for fonts, so that only the apps that read the DPI value and scale accordingly are affected, but this means everything else will look teeny-tiny. To achieve this (which I still don’t recommend on small screens), search and reach for “Make text and other items larger or smaller”: 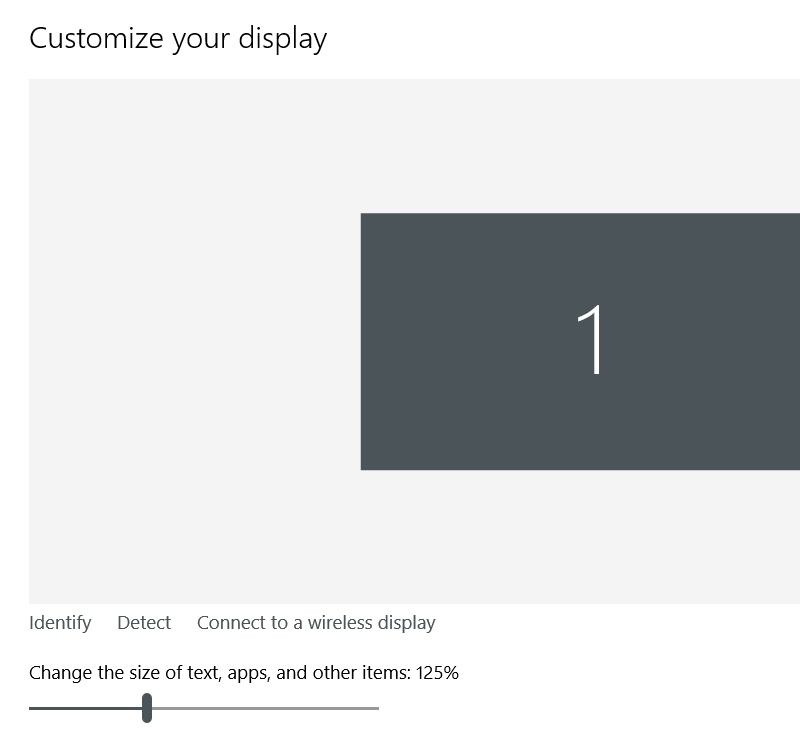 The alternate way, 2, is not recommended and it looks this way: 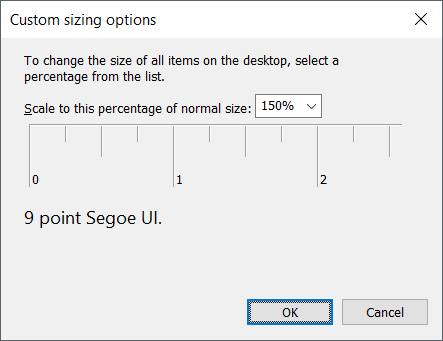 Note that only one of the two can be used at any time! Should you have adjusted this old-style way, the standard scaling screen will say that another scaling way is used and that you need to reboot or log off and log on. Should you insist and change back and forth settings in both screens, the system might get a bit confused.

But the issue that really bothered me was that I need to update myself to 1511, and that after the update, getting rid of Windows.old, $Windows.~BT and $Windows.~WS wasn’t hassle-free. But first, two cleanup tricks.

Here’s what Disk Cleanup can delete in this mode: 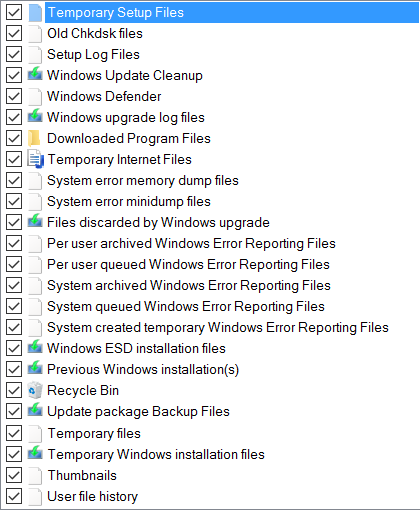 My problem was with the first cleanup though. I couldn’t get rid of the following folders because each of them included a copy of ST_Accel.sys which was in use!

The exact same file existed in homonym folders under the current Windows folder, but for some reason Windows preferred to use the older copies, no matter what I tried or how many times I rebooted! After a lot of fiddling, I found the fix:

Is it something I forgot? I hope not.* So far, the system works very well for the price.
__
*Oh yes, there was something. I couldn’t find a way to change the default for the keyboard lights to be off instead of on. I have to manually disable them every time using Fn+F9, except for the rare situations when I need them. And the brightness is not adjustable, it’s only on or off.

**Actually, I discovered the kits for two (installed) updates for Acer Control Center (2.1.3012.0 and 2.1.3016.0) under C:\ProgramData\OEM\UpgradeTool\ControlCenter_v2. Then it was able to download 2.1.3019.0 on request, so there is no need to keep the update disabled–the server is back online.

« I’m set for ESET
Debunking some myths about SSDs »