Debunking some myths about SSDs

SSD seemed to be the second best invention since sliced bread and Netflix, unless we remember those OCZ SSD models that died too early after a rather small number of writes. Still, modern SSDs have much improved, and since this bloody Windows 10 seems to like to access the disk only too often, “SSD” is the winning keyword–unless you like it to be “Advil.”

The problem is, most people don’t know how SSDs actually work. To start with the biggest mystery, most people have heard of the TRIM command, but they don’t quite understand it. Some of the quick definitions call it a “background garbage collection mechanism,” and Wikipedia comes with this crap:

The TRIM command is designed to enable the operating system to notify the SSD which pages no longer contain valid data due to erases either by the user or operating system itself. During a delete operation, the OS will mark the sectors as free for new data and send a TRIM command to the SSD to mark them as not containing valid data. After that the SSD knows not to preserve the contents of the block when writing a page, resulting in less write amplification with fewer writes to the flash, higher write speed, and increased drive life.

But hey, no matter the storage medium, the file system or the operating system, no standard delete command actually deletes data! The deleted files are left intact on the disk, and only the corresponding entries in the FAT, MFT or the inode table are updated. Of course, this still requires a disk write. This still happens with an SSD, because this can’t be volatile info–the disk has to know what files are there and where are they located (virtually, as the firmware will take care of the actual translation). So, at fist sight, it’s not clear:

As someone once said, SSD manufacturers protect their technology secrets more carefully than Coca-Cola protects its soda formula. And yet, someone must know how this works, right? Especially as there are still scary figures out there (the article is from 2013 though):

Consider the read/write longevity of SLC (Single-Level Cell) and consumer-grade MLC (Multi-Level Cell) NAND memory, the storage media used to build SSDs: The former is typically rated to last 100,000 cycles, but the latter is rated for only 10,000. Relax—you’d need to write the entire capacity of the drive every day for 25 years or so to wear out all the cells. The latest TLC (Triple-Level Cell) NAND that Samsung is shipping is rated for only a few thousand writes, but you’d still need to write the entire drive’s capacity for something less than ten years to use up the drive. No average user will ever come remotely close to that.

A few thousand writes, and this is supposed to be enough?! TRIM must be the key to that, but how? Here’s the best quick explanation on how an SSD works, well hidden in this inconspicuous paragraph from the same article:

Having the controller write to every NAND cell once before it writes to any cell a second time—a technology known as wear leveling—also helps to extend a drive’s life span. Wear leveling ensures that no cell endures heavy use while another sits virgin next to it. Newer controllers also compress data on the fly before writing it to the disk. Less data equals less wear.

Let’s note that there are some more constraints:

Let’s now try to design a quick and dirty way to implement an SSD, given some NAND-flash and a controller:

If I’m not wrong, this should ensure that “no cell endures heavy use while another sits virgin next to it” and that “every NAND cell is written once before a write occurs to any cell a second time.”

But basically the TRIM command is only responsible for releasing for use the cells that are not in use, but not zeroed yet. While improving the write speed to the not-zeroed cells, TRIM cannot decrease the fragmentation of an SSD and, as we’ll see, it cannot fully recover an SSD’s performance–only a full erasure of the entire SSD could do that!

The other day, I used CrystalDiskMark to measure the speed of my SSD. And here’s the big surprise:

That’s right, the TRIM command made things… worse! But there’s an explanation to that.

Let’s consider the following fragmentation chart as a discussion material: 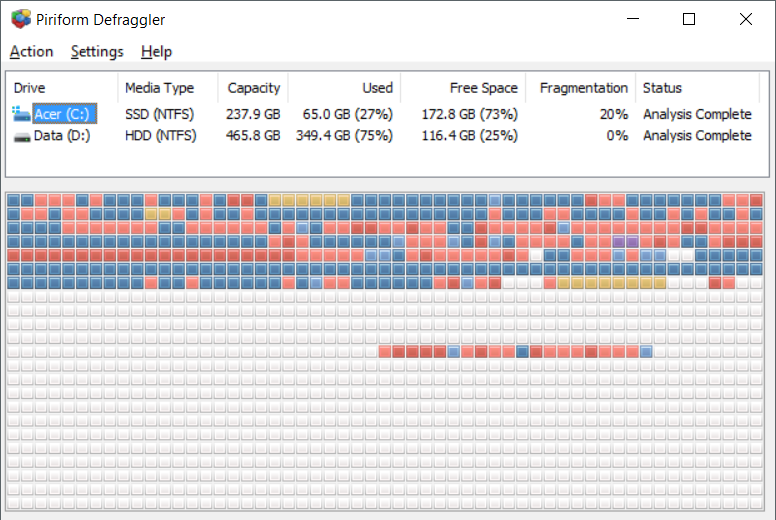 The two shades of red are marking different levels of fragmentation. Now, consider this:

I cannot explain why both the sequential writes and the random (“4k”) writes are affected by a TRIM, nor why the read speed is also affected! Maybe the TRIM command also clears some temporary tables used by the firmware to optimize the access, I don’t know.

This Kingston disk seems to lack the aforementioned “huge cache” of 8-16 GB that some SSDs have. Here’s an SSD (Toshiba THNSNH128GBST) that seems to have such a cache: 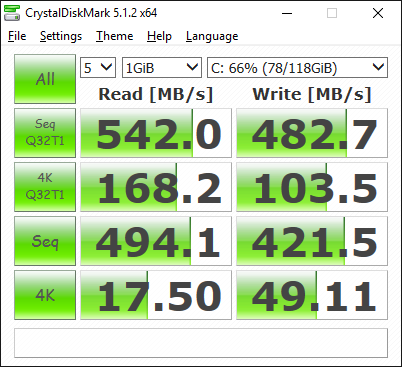 Technically, the write speed must be much lower than the read speed (unless we’re talking of a HDD), and only a significant amount of cache can lessen the difference.

A fact remains: SSDs cannot be defragmented, and this is an uncorrectable flaw. In Windows 10, Disk Defrag issues a TRIM command when told to defragment an SSD–go try it!

Of course, people like Scott Hanselman can say that there is some kind of SSD defragmentation that can be performed by Windows, namely “your SSD will get intelligently defragmented once a month,” and that it can be triggered (as expected) by performance issues:

Who can tell what the truth is with regards to defragmenting an SSD? In an age of the open-source software, the intricacies of the SSD internals are unknown to the general public… If an SSD is really “intelligently defragmented” by Windows once in a while, it must perform some sort of “free space consolidation,” so to hurt as little as possible the SSD wear level.

Either way, as noted, the eMMC storage of your smartphone also needs a TRIM every now and then–and even so, the full performance cannot be reached unless you reformat it to factory settings. External storage, both as microSDHC and USB flash drives are even worse: there is no TRIM command for them, the only way to make them faster is to reformat them!

Back to our mysterious SSD and the TRIM that sometimes hurts, how do we choose an SSD? We read benchmarks and specialized magazines and their recommendations, right?

The problem is that the speed measurements for large files, small files and sustained throughput are not always relevant enough. Here’s the very same Crucial BX200 SSD (960GB) reviewed by PCWorld: Crucial BX200 SSD review: Good for casual users, but not for slinging extra-large files:

The BX200 is actually two drives in one: a very small and fast one that uses DRAM and SLC (single-level cell) memory, and another much larger and slower drive using TLC (triple-level cell/3-bit). In the BX200’s case, that TLC can only write data to its cells at about 80MBps. No, that’s not a typo. But because of that small cache drive, the BX200 acts just like a high-end SSD most of the time.

We tested two versions of the BX200: the 960GB with 12GB of cache and the 480GB with 6GB of cache. The 240GB version has only 3GB. […] everything looks hunky-dory in the artificial benchmark AS SSD for the 960GB version because the 10GB tests fit will within its 12GB cache. Not so with the 480GB version, and you can expect even worse sequential write numbers out of the 240GB version.

Even the 960’s 12GB of cache is not large enough to mask slow TLC performance in our 20GB copy tests.

Bottom line: the cache can help, but when the actual writing has to occur, make sure your SSD can perform it at more than 80 Mbps. Curcial BX200 (480 GB & 960 GB) has pathetic results even in the tests made by AnandTech. And yet, Crucial BX200 has positive reviews on other sites: on Tom’s Hardware; on TweakTown; on StorageReview.com. Go figure…

RECAP: All in all, I’ve only debunked (sort of) a very few myths, but here’s what I discovered:

« “A” for “Acer TravelMate P6”
The world is swarming with incompetents… »