Kaspersky is one more time a valid choice

To stop adding comments to old posts, here’s a small update as a full-fledged post. Despite my temporary commitment to Panda Internet Security (for its features called Data Shield and Application Control) for my Windows 10 laptop, I’ve run into this problem: on a 64-bit Windows 7 Professional system, the trial edition wasn’t recognized by the system as a valid security solution, and Windows insisted on using Windows Defender and MSE (which happened to be installed). Not being eager to investigate that particular Windows 7 installation (it was an enterprise setup), I looked for a quick alternative.

For what it’s worth, my safe alternative still is either of KAV or KIS.

I had a stub that installed a 3-month trial of KAV in French, but now it installs a 50-day license of KAV 2017. By removing the app while preserving the license, other localisations of KAV would inherit the longer trial period after running the normal trial Setup–I tried with the German edition.

On various sites (I don’t trust Amazon for software licenses, they might be locked on North America), the offers are better: Kaspersky Internet Security 2017 for 13.49 €, as compared to Kaspersky Anti-Virus 2017 for 14.80 €.

A nominally much better choice just popped up in the form of a special CHIP license for a new product called Kaspersky Security Cloud (Personal), currently available in Germany and in the UK. The single-DVD (5.80 €), double-DVD (7.40 €) and digital bundle (6 €) editions of CHIP 8/2017 all include a free 1-year license (“a 69.95 € value”), in the annoying way CHIP licenses work: the first activation is for 183 days, then you have a 10-day time frame to enter the license code (the code given by Kaspersky, not the code from the magazine) to add another 6 months.

But I installed the trial edition and the program wouldn’t provide any protection of all unless the user creates a Kaspersky account and authenticates from within the app! Pure garbage–uninstalled right away. I just want a security solution that works based on a license code, full stop.

So the choice is back to KAV or KIS. I tend to prefer KAV, to keep it on the lighter side, despite most of the offers being for KIS, KTS or whatever hyperinflated crap they have in store (now KSC).

In the past I was able to uninstall KAV/KIS and clean the system (without using a trial resetter!) so that a 3-month trial would work again on a reinstall, but it’s too much of a trouble (and I’m not sure it would work with these OEM licenses). For the time being, I have 3 months to wait for the 2018 line to be officially released and to hunt for a convenient coupon.

Here’s how Kaspersky entered once again this household…

UPDATE: Eugene Kaspersky has posted on July 25: KL AV for Free. Secure the Whole World Will Be, announcing the global launch of Kaspersky Free!

The roll-out won’t be fully global instantaneously; it’s going to be done over four months in waves as per different regions. The first wave will be the U.S.A., Canada, and many of the Asia Pacific countries. September: India, Hong Kong, Middle East, Africa, Turkey and Latin America. October: Europe, Japan and South Korea. November: Vietnam and Thailand.

But contrary to the first phase of testing Kaspersky Free, when your IP really needed to be from Russia-Ukraine-Belarus (then also China) in order to have the app downloading signature updates, this time if you can get the app, it just works! And you can get it from here. (Or better get it directly from here; the previous link downloads build 12579, because the file timestamp is newer, but build 12645 is newer. These are however only small stubs that download the full setup.)

KFA 2018 starts confusingly in a way where it asks for an account and a license key; once you ignore the request, if will activate itself for a full year: 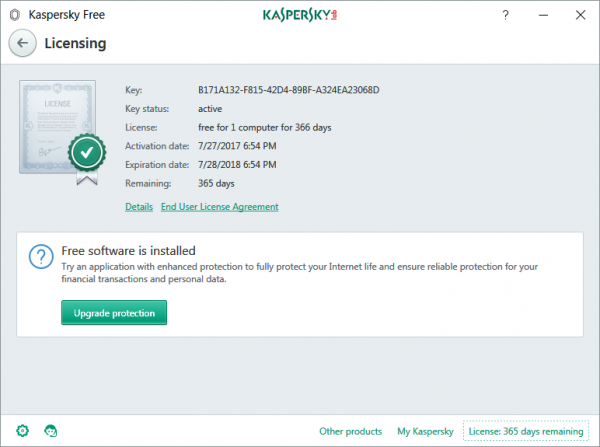 This is a marketing approach meant to show you how much more you’d get once you purchase a license.

The real problem is that KFA doesn’t include the “System Watcher” component present in KAV; it only shows the equivalent for KIS, “Application Control” (which monitors more than “System Watcher,” as KIS also includes a firewall, whereas KAV doesn’t), as disabled:

This means KFA 2018 only offers basic signature-based protection, and nothing specifically targeted at ransomware! This KAV-specific component is not present in KFA, which is a pity: 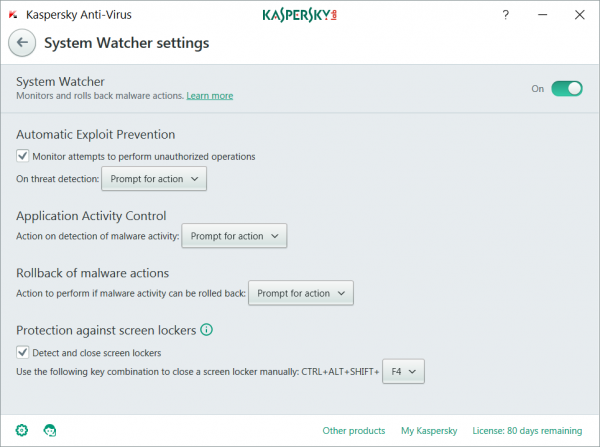 The strange thing is that in the screen where you can add an exclusion, both the application control and the system watcher components are shown, although they’re not there! I suppose this is meant to allow you to have the exclusion work even if you later upgrade to a paying edition of the product: 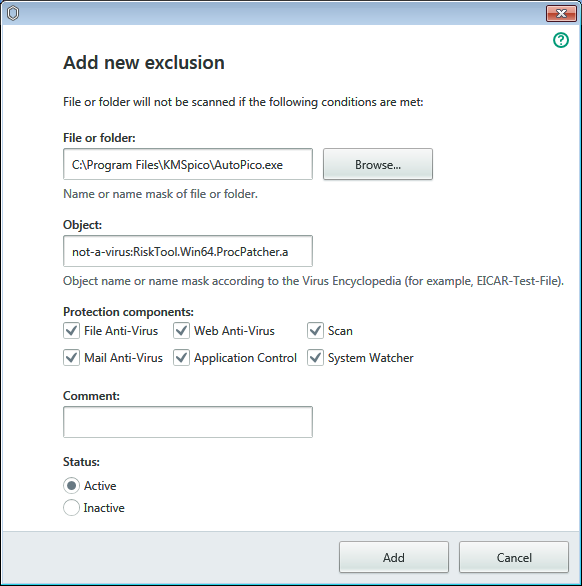 Either way, the bottom line is that Kaspersky Free Antivirus 2018 (18.0.0.405, English UI) is already available to everyone, just not mentioned on the national sites until it’s officially launched in the respective region; and that its protection is inferior to that offered by Kaspersky Anti-Virus. I don’t know what happens after the first year of free usage; the initial idea of launching a free version was that after one year the user is supposed to start paying. If this is the case, I expect the user will be asked to pay for a KIS license, not for a KAV one, as the GUI is definitely belonging to the KIS line, with disabled components.

EDIT: I just noticed that AV Comparatives has released a Review of Free Antivirus Software 2017 (Last Revision: 27th July 2017), in which it compares (among others) Kaspersky Free vs Kaspersky Anti-Virus. Relevant excerpts: