This shouldn’t be interpreted as if I’d suggest, support, or recommend any flavor of Linux Mint. Based on how things are in Linux in the last 15 of its 30 years of existence, the only recommendation should be: “use what works for you, because it’s a compromise anyway!”

I’ve learned of the Beta ISOs for Linux Mint 20.2 a couple of days before they were announced on the Linux Mint Blog (Cinnamon, MATE, Xfce) and on Distrowatch. They were on a single server in Ireland initially, and it took an eternity to download them.

I only tried them as live sessions, using Ventoy, but they were all almost bug-free or, in other words, each of them was of excellent quality for a Beta.

Either something changed in their philosophy since I fell out of love with Clem’s leadership, or it was like that forever and I missed noticing it. Well, “forever” should mean “since they started to only base on LTS versions of Ubuntu,” which I guess it’s version 17 from 2014, which is past the time I considered them good enough for my taste.

Great news. And they include Thunar 4.16.8, which fixes an infamous CVE that was mostly ignored by many and about which I ranted a lot. Built on June 11 in Mint, some 4 weeks since the package has been released in XFCE, but that’s the date the entire XFCE 4.16 was built in Mint, so that’s OK.

Do you want screenshots? What for? Mint is always displaying the same boring identity: dark gray with minty accents, with mediocre contrast (Dedoimedo constantly complains about that: “Mint ships with #303030 gray fonts rather than pure black, and this made me eyes water right away.”), but with the same set of great helper tools that made it so popular. Plus Warpinator, which is still installed on my Android phone. Other small improvements are typical to the Mint tradition: nothing really disruptive.

Oh, the purists might object that Mint sets xed as the default editor in all the flavors, thus Mousepad is not preinstalled. But xed is more powerful IMO, and very few people really love Mousepad.

The big plus is that Mint 20.2 XFCE should be preferred to:

Well, I’m forced to say it: if you like Ubuntu and you prefer XFCE, use Mint 20.2, not Xubuntu!

For a small diversion, I wanted to try the new version of Lucas Chess, now available for Linux too: 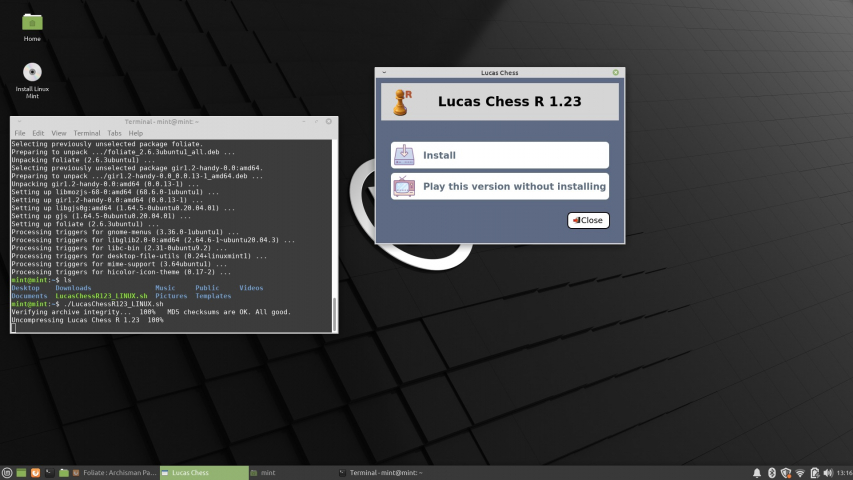 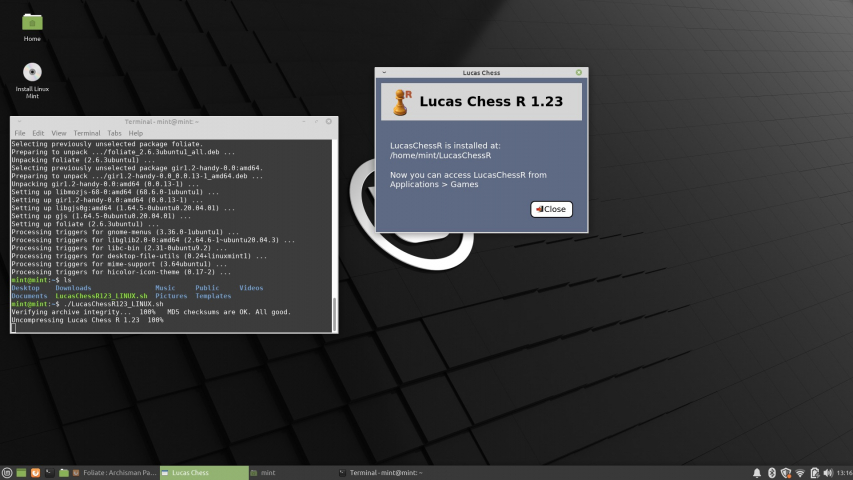 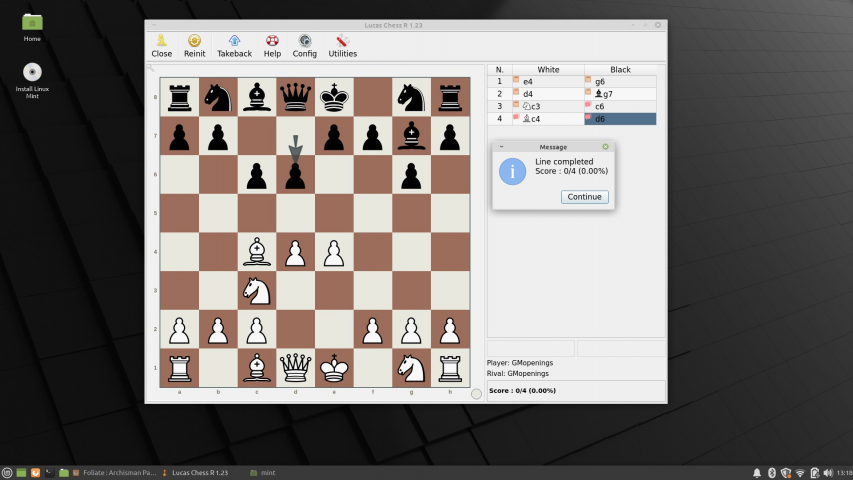 Mint 20.2 MATE: Nothing to report (rien à signaler), or not much

The MATE flavor is just fine, it works great, and it looks familiar. I recently had a reignited flame for MATE, but then Wimpy’s camarilla pissed me off. Either way, the answer to the question “MATE or XFCE?” cannot be given, as it’s a matter of personal taste.

To explain the latter: look in XFCE 4.16 at the titlebar of any app, then at the titlebar of its About box. If the Appearance Style and the Window Manager Theme are not synchronized, you’ll get something like this (here the style is dark, and the window decorations are not; note also the different color accents apparent in the close buttons):

Typically, the CSD fuck-up is even worse in XFCE:

Fortunately, Linux Mint XFCE has been carefully themed, and there’s always a Window Manager Theme to match a Style, which is not the case in most distros. Thumbs up to Mint, but some people could still object that they’d need to change the appearance in two places instead of a single one to get some CSD consistence. They might prefer MATE then.

But is Mint 20.2 MATE better than Ubuntu MATE 20.04 LTS or Ubuntu MATE 21.04? Esthetic-wise, Ubuntu MATE has better out-of-the-box looks, and it’s trying to be helpful with EIGHT predefined layouts, of which the most meaningful ones are Familiar, Redmond and Traditional (Mint uses the Redmond one). But Ubuntu MATE is forcing snaps on you, which is abject. So it’s a matter of taste and principles, after all.

Here too, you’ll have xed for a text editor. I couldn’t tell whether xed is still superior to Pluma or not, but nothing prevents anyone from installing whatever they want.

Some might say that Cinnamon is the raison d’être of Linux Mint. As much as I don’t like Cinnamon for it shares a number of stupid design decisions with GNOME3, it’s a huge feat for a team that doesn’t have the financial backing of GNOME. And Cinnamon being Clem’s kid, here’s Linux Mint 20.2 upgrading from Cinnamon 4.8 (in 20.1) to the brand-new Cinnamon 5.0!

I’m not a fan of Cinnamon, and I’ll never be, and on this Acer TravelMate P645 there’s a good reason for that: the headphone jack! As I explained in several posts since last summer, when one distro or another wouldn’t detect the connected headphones, there was always possible to work around it by the means of alsa-base.conf and blacklist.conf. It was an on and off issue, and sometimes the hack had to be changed, usually depending on the versions of ALSA and PulseAudio. But, as explained in section “2. PAST AND FUTURE” here, last December they introduced a patch in the kernel meant to tell it that Acer TravelMate P648 and P658 only have a single audio jack (mike+headphones) instead of two. The problem is that their test doesn’t only match P648 and P658, but also my P645, which has separate mike and headphones jacks, so they break it! As far as I understand it, it’s now impossible to get my headphones detected in recent kernels, so I stopped trying to fiddle even with older ones, because I can manually switch the audio output to “Headphones (unplugged)” in KDE, XFCE, MATE… but not in Cinnamon!

No matter the version, Cinnamon’s stupid design doesn’t allow the user to see and select the disconnected devices:

Compare this to XFCE, here in Mint 19.3 (but it’s the same in newer versions):

This is a strong discouragement for me to use Cinnamon.

Beyond that, there are UI/UX design decisions that seem idiotic to me. Here’s an example of a configuration dialog:

Each of the items in the top-right list can have multiple assigned bindings, which can be useful. However, the user cannot see the current bindings unless they click, one by one, the items in the said list! This is anti-ergonomics at its best.

In contrast, MATE and XFCE do it “traditionally”; here’s MATE:

I agree that in MATE I can’t set multiple shortcuts, but at least everything is visible at a glance, no action required!

In the third place, I noticed that Cinnamon’s panel doesn’t really look “traditional” (Windows-ish). That’s because it uses the Grouped window list applet:

What I need it to use is the Window list applet:

That’s because I want it to display the windows’ titles:

LATE NOTE: It looks like the icon-only taskbar mania is a phenomenon I wasn’t aware about. I just noticed that Fedora 34 KDE uses the Icons-only Task Manager instead of sticking to a traditional KDE experience:

Idiots be idiots, legions of them. /LATE EDIT

Otherwise, only petty annoyances that are not Cinnamon-specific. As explained in Subpixel idiocy, defaulting to Slight, RGB is commonplace, but stupid, and I quickly change it to Full, Grayscale:

To comment on something Dedoimedo encountered in the older Mint 20 Ulyana Cinnamon, namely “Not printing with the auto-detected printer. Nothing.”, I have to say that I experienced the same (temporary) frustration in Fedora 34, but then I installed the official driver for my Epson, and everything went great, including the scanner! So if something doesn’t work with the printer, it’s not necessarily Mint’s fault.

I don’t mean to imply that Mint’s theming is that bad, but I just wanted to see how a classic Win95/Win98 theming would look in some GTK3-based desktop environments, and I happened to have Mint at hand.

Chicago95 is built and hosted on the openSUSE Build Service. For Ubuntu 20.04:

For Fedora 34, rawhide must be used:

Given that I’m not satisfied with the way Win10 emulates Win95/98 in Classic mode (it’s worse than in Win7 IMO), I’m even less satisfied by the relatively clumsy relief of the decorations obtained in MATE:

Compare to a full Chicago95 desktop in Fedora 34 XFCE:

Wrapping up (this wasn’t a review!)

Sometimes, Linux Mint can be a pleasant surprise even for people like me. I start to understand why it’s constantly in Top 4 or Top 3 on Distrowatch. Notwithstanding my dislike of Cinnamon, I can affirm that XFCE (4.16!) and MATE are very well integrated, and carefully put together. They cared about how Qt/KDE apps look like, so Qt5 Settings (qt5ct) is preinstalled. They cared about languages, so they have mintlocale (not language-selector-gnome, but equivalent to it, and even simpler). I have also revisited some of the other tools, and most of them are truly useful.

« Half-Truths, Lies, Incompetence and Idiocy Continue to Prevent a True Debate on Vaccines
The Alphabet of Our Death »